After a standout debut at the season-opening Liqui Moly Bathurst 12-Hour, the mighty Interlloy/Wilson Storage KTM X-Bow GT4 made a return to the circuit last weekend for the opening round of the CAMS Australian GT Trophy Series at Melbourne’s Sandown Park, with M-Motorsport team-boss Justin McMillan joined by part-time prototype driver and former GT Trophy class champion Dean Koutsoumidis.

With GT4 still emerging in Australia as a lower-cost category of supercar competition, a proposed battle between marques like Aston Martin, Ginetta and Porsche failed to materialise for the opening event, but future rounds are expected to see the stunning #48 KTM faced with some stiff competition, so Sandown gave the experienced GT operation a chance to gain some more valuable knowledge and data for the car.

“We showed at Bathurst just how impressive the KTM is after claiming the GT4 lap-record and leading by three laps ahead of a final hour drama with electrics,” McMillan reflected. “The car was essentially flawless and in GT4-spec, we were effectively untouchable, so we were relishing the opportunity to go head-to-head with the other marques, but sometimes with the introduction of a new concept like GT4 it takes a little time to get the field together, but we’re expecting by the end of the season to be battling door-to-door with a number of other GT4 cars.”

With the bulk of the field either older generation GT3 cars, or V8-powered Australian MARC cars, the KTM was out-gunned in the performance stakes on a circuit which is renowned for rewarding horsepower, but that didn’t stop the M-Motorsport team from pushing the car - and it’s two drivers - to the limits in what were typically challenging Melbourne autumn conditions.

“The beauty of using Sandown as an effective test session for the car was that we faced weather we’d not driven in before, and that gave us a huge amount of data to add to that we received from Reiter Engineering when we took delivery of the car - it was invaluable” McMillan added.

“We qualified well, although obviously not in the league of the much faster GT3 cars, then Dean and I had two terrific races where we faced some pretty tough conditions. I was very happy with the performance of the car, although it was a bit of a handful in the wet in race one, but from what we learnt from that, we went three seconds faster in race two. From my perspective I was very happy, Dean is an experienced GT campaigner, and he’s also driven prototypes [sportscars] a lot, and I was able to match his speed, so personally I felt we had a fantastic weekend.

For former Australian GT Trophy champion Koutsoumidis, a recent test at Winton Motor Raceway gave the experienced Victorian a taste for the mighty 2-litre turbo KTM, and he admitted that after a couple of years out of the GT saddle, he thoroughly enjoyed his experience in the Reiter Engineering-built machine.

“Being the only GT4 car wasn’t a big issue because it gave us an opportunity to learn more about the car,” Koutsoumidis admitted. “Having both dry and wet conditions was a great opportunity as we progressed a lot with set up knowledge. M-Motorsport is a delight to drive for, I really loved the car and the team and I can't wait to do it again!

The next event for the 2017 CAMS Australian GT Trophy Series is at Winton Motor raceway in regional Victoria on 9-11 June. 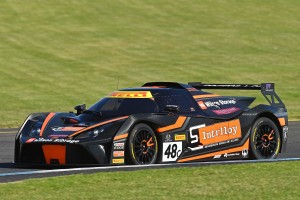 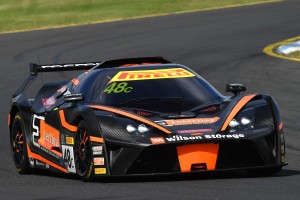