After a number of years campaigning a GT3 Lamborghini in the annual once-around-the-clock endurance classic, M-Motorsport changed tack in 2017, adopting the emerging GT4 category with the mighty Reiter Engineering built KTM X-Bow, the team entering a single Interlloy-supported entry with great effect. Leading by more than a lap with less than a quarter of the race to go, the team were hit by niggling little issues which ultimately sidelined them just two hours from home. The plan for 2018.. Go again, but this time employing ‘double trouble’ - two identical X-Bow GT4s for two all-Australian crews.

Frustratingly the team were on the back foot almost immediately heading into first practice, changes to the X-Bow balance-of-performance [BoP] seeing their fuel tank size reduced and a dramatic increase in weight, whilst some of their new rivals appeared to be given a much more lenient penalty. From that point on, it was clear it was going to be a tough event.

Despite that both M-Motorsport KTM’s ran strongly across the weekend, qualifying netting fourth and sixth, whilst the race saw the #49 entry as high as second ahead of another niggling issue which saw them sidelined for four laps, dropping them to third in the process, whilst the #48 entry was sadly eliminated after an off coming down the mountain in the second hour of the race.

There’s no better preparation for Bathurst than laps behind the wheel on the circuit. For team-boss Justin McMillan and M-Motorsport regular Glen Wood, they’d enjoyed that luxury in the past, so too Tim Macrow who would be sharing driving duties in the #48 entry. For Glen Wood, his team-mates in the #49 KTM - Trent Harrison and Cody Hill - would turn their first laps of Mount Panorama in practice, whilst for Caitlin Wood, she too would get her first laps off the simulator on Friday, joining fellow M-Motorsport recruit David Crampton who was sharing driving duties between the #49 X-Bow and his Radical SR3 in which he was entering his third Bathurst event on the same weekend.

Ultimately all seven drivers achieved laps ahead of qualifying with Glen Wood the standout, and despite the performance penalties, he was often the fastest GT4 (Class-C) car on track.

By the end of the two qualifying sessions, the #49 entry had qualified 42nd outright and fourth in class, just over a second off the pole-sitting BMW, whilst Tim Macrow had taken the #48 entry to the sixth fastest time, just eight tenths off Glen Wood’s benchmark time.

Whilst Wood would start the #49 entry, Justin McMillan took to the wheel of the #48 for the start, the two M-Motorsport/Interlloy team-mates running cleanly through their opening stint into the rising sun to pit for their first stops, Wood in from third, McMillan fifth, the team using a Safety Car intervention to good effect, sending Cody Hill and David Crampton out into the early morning light.

Sadly Crampton achieved just a handful of race laps before an off coming down the mountain into Forrest’s Elbow, the #48 entry ending up against the barriers on the outside of the corner with the right front wheel torn from the tub. Crampton was unhurt, but understandably disappointed in the result.

“I’m okay, but I’m shattered by the result for my team-mates,” Crampton admitted afterwards. “The team did such amazing work and we were on for a good result, especially after Justin’s opening stint, that moved us up a couple of places. I’m not 100% sure what happened, visibility wasn’t the best, but I made a slight error coming down to the Elbow and just kissed the wall, but after that I was just a passenger. I can’t thank the team enough for the experience, and I know I’ll be back, it’s such a great event.”

Sadly the retirement of the #48 entry meant that two-time Australian Driver’s Champion Tim Macrow would not get any race laps, whilst for Caitlin Wood, the experienced X-Bow campaigner too would fail to record any race laps on the mountain, and whilst relieved that Crampton was unharmed was disappointed not to have shown the pace that she’d delivered during practice and qualifying.

“My first laps of Bathurst were amazing, I got to fully experience the track for the first time in a race car,” Caitlin admitted. “That’s motorsport though, it’s a tough game and I will look to be back next year for sure. M-Motorsport run a really, really good team but the handicaps we were given really did give us hell during the weekend, but that’s part of GT racing and you just have to cop it on the chin.”

By mid-race the #49 entry was on the lead lap, Hill, Trent Harrison and Glen Wood pumping out solid consistent stints, but against the leading BMW GT4 they were struggling to keep within reach with much shorter stints due to the decrease in size of the fuel tank, a scenario which saw the KTM pit 17-times throughout the race in contrast to the BMW’s 12 stops and the second-placed Ginetta which ultimately stopped just 13-times.

Sadly though, despite Glen Wood turning the fastest Class-C lap of the race - 2:17.2154 - the #49 team suffered another niggling issue mid-race, the safety latch on the big cockpit canopy failing forcing the team to make changes, something which ultimately sidelined them for a number of laps, dropping them back from a comfortable second - challenging for the lead - and into the clutches of the third-placed Ginetta, ultimately dropping behind them after yet another fuel stop.

Glen Wood completed a double-stint to finish off the race, but despite a herculean effort to try and make up the time deficit on the Ginetta and factory driver Mike Simpson, he was unable to breach the gap, the warmer afternoon air having an impact on the pace of the car and the driver, Wood across the line very much worse for wear for his efforts.

“I just charged, they were all qualifying laps in the end in a car that is the most physical car I’ve ever driven,” he lamented. “We just didn’t have the pace at the end, and the extra fuel stops killed us, so whilst we were faster than last year, so were our rivals, but the smaller tank and the extra 60-kilograms didn’t help.

“In the end, the heat in the cabin got me too, I didn’t drink because the fluid was warm and pretty unpleasant so I was pretty dehydrated, but we made it and I’m happy that we were able to give M-Motorsport another podium, but certainly we were always up against it with the BoP we were given. Maybe next year!”

For Trent Harrison, he was happy to have finished his maiden race at Bathurst with a podium result. “It was such a big event, such a fantastic circuit and with so many big names in the field, the M-Motorsport team did a brilliant job - a podium result with a car that doesn’t have a scratch on it, I couldn’t be happier. It was a long day, I did nearly four hours in the car, but I’m very happy with the result.”

Having been focused on victory in 2018 after a solid debut with the KTM 12-months prior, team-boss Justin McMillan was understandably reflective on the weekend, and happy to have delivered a podium result despite the challenges presented in the leadup to the race.

“There’s no denying the BoP they handed us immediately ahead of the race was going to make victory near on impossible. A big weight increase and a smaller fuel tank meant that we were never really in the hunt for the win against a factory car that hadn’t been given any real penalty, but we fought hard and were looking good for second before the latch issue, something which won’t catch us again, so we have to be happy with the podium.

“On a personal note I enjoyed starting the race and turned some of my best laps ever at Bathurst in my first stint, moving up a couple of places in the process, so that was good, and it was good to see Caitlin turning such quick laps in her first drive at the mountain, clearly her experience in the car in Europe played a big part in that. It was disappointing for Dave [Crampton] to have the off, but that’s Bathurst, these things happen - look at the number of incidents we had in the race, it’s a miracle to finish without any dramas - the good thing was he is okay, so we move on to fight another day.”

To keep up to date with the M-Motorsport Interlloy team during the 2018 season, follow the team via; 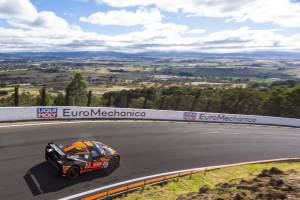 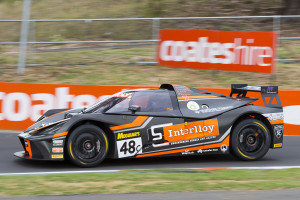 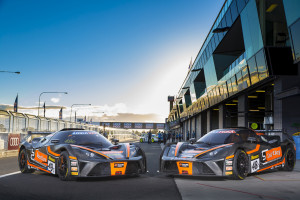