Melbourne’s M-Motorsport will return to Mount Panorama Bathurst for the season-opening Bathurst 12 Hour looking to make amends for an almost certain victory in the GT4 category last year, the successful GT team launching a two-car assault on the once around the clock event for 2018, with the top step of the podium their primary focus.

The traditional pre-Bathurst test at Phillip Island saw the two pristine carbon and orange KTMs turning laps with their respective drivers, and all were impressed with the performance of the nimble 2-litre turbo powered X-Bow.

For Bathurst 2018 it will be two all-Australian teams behind the wheel, with a mix of experience and young talent - a hallmark of M-Motorsport’s time in GT racing.

For McMillan, the move to two cars, and two Australian crews is a shift away from past seasons at Bathurst, where he has employed the services of drivers like Reiter Engineering’s international stars Tomas Enge and Reinhard Kofler, but whilst the international drivers won’t be there, the team will enjoy the full support of Reiter Engineering and KTM Sport for the event.

“Last year was immensely frustrating for us with a niggling oversight in the location of some of the electrics causing us to retire from a comfortable lead when we looked good for a debut win,” Justin McMillan lamented.

“We wanted to try something different this year with the driver lineup. I’ve been impressed by Glen [Wood] since he joined us and he’s shown great speed and maturity in the Lamborghini, and again at Bathurst last year in the KTM, the first time he’d raced the car, so he was a great advocate for trying some of the young drivers he’s competed with over the years, including Trent, Tim and Cody.”

Macrow - a two-time Australian Drivers’ Champion with multiple Formula 3 victories to his name - is one of the most experienced drivers in any race paddock around Australia, so an ideal addition to the team, he also spends much of his time as a driver coach for emerging and amateur drivers, one of which is Vantage Freight’s David Crampton, Macrow helping the Sydney-sider to podium finishes in the Radical Australia Cup over the last two seasons.

Macrow, Crampton, Harrison, Hill and Caitlin Wood all drove the mighty KTM X-Bow during the Phillip Island test, and all of them took one thing away from the two-day sessions.

“I’m so impressed by the car, and also how easy it was to drive,” David Crampton admitted. “It’s a lot more physical than I expected, but immense fun, and it’s clear that M-Motorsport have a great handle on the setup of the car, because we were immediately into a good quick rhythm.”

Whilst lap times weren’t revealed, all the drivers were within reach of Glen Wood, who’d arrived back in Australia just hours before the session after competing alongside McMillan in the annual Dubai 24 Hour race in an identical KTM GT4.

“I set a benchmark time for the other drivers to use as a foundation, and all of them were within reach of the mark we set them, so from that aspect, the test was faultless,” Wood admitted. “For Cody Hill, it was his first time in the car, and more miles will certainly bring him up closer to the pace that Trent and I expect to run at, whilst in the second car, we were impressed with David and Caitlin - who has some good experience in the X-Bow.”

Despite turning 21 just days after the test, Sydney’s Caitlin Wood is perhaps the most experienced of all seven drivers in the X-Bow, having claimed victory in the 2016 running of the Reiter Young Stars [RYS] program, a program that put rising young male and female drivers together in a fleet of X-Bows in a variety of GT competitions around Europe. Caitlin claimed the win and with it, earned a drive in a Lamborghini Gallardo R-EX GT3 in major GT3 events last season.

For Glen Wood and Justin McMillan though, they are both ‘race ready’ after an exhaustive twice-around-the-clock run in Dubai during the annual 24 Hour GT event, the two drivers joining experienced Reiter veteran Peter Kox and Nico Pronk for their maiden visit to the Middle East, the Reiter-supported team impressing, Wood in particular.

“The event was mad,” Wood admitted. “Such a long way, and the night stints were crazy, there were so many patches of pure darkness, that half the time you were guessing where the apexes were, but despite that, I’d have to say it was the greatest racing experience of my life, and I can’t thank Justin and Reiter enough for the opportunity.”

Ultimately the Reiter KTM failed to finish the event despite being one of the quickest GT4 cars in the field, testament to their pace was the fact that they were able to claw back 13-laps on the class leaders after an early incident forced them to pit to repair the cooling system after contact from another car, before ultimately a GT3 car ended their event just two hours from home having moved back into second place.

“Like Bathurst last year, it was a huge disappointment, but forgetting that, everything again ran faultlessly with the car, and the knowledge we gained of how to set up and tune the car will be of immense value to the team,” Wood admitted.

“To be honest, we all go into Bathurst this year with great confidence. We know the cars, we believe we have found all the little things that could go wrong in 12 hours of intense racing, and we know how to tune the car for the conditions. We can’t control the other teams, but as a group, we feel we’re every chance of making good on the promise we showed last year!” 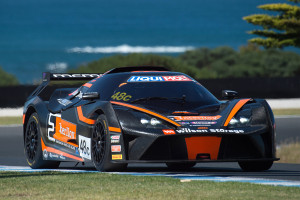