An off-season change from the mighty Reiter Engineering built Gallardo R-EX GT3 to the giant-killing KTM X-Bow GT4 saw Interlloy M-Motorsport team leader Justin McMillan line up for the opening round of the 2018 Australian GT Championship in Melbourne ready to battle against a string of new GT4 machines across four races at the Australian Grand Prix.

Hot off a strong run at the season-opening Dubai 24-Hour race alongside team-mate Glen Wood, McMillan’s Liqui Moly Bathurst 12 Hour attempt this year was thwarted early after a strong opening stint in the #48 Interlloy entry, a stint that saw the KTM running in amongst the GT4 race leaders.

Despite running in past seasons at the Grand Prix in the outright category, McMillan chose to do the running alone in 2018, facing a variety of conditions and results, in the process claiming third outright for the category by the close of the four races, which included a dominant class win in the wet third race.

Qualifying saw McMillan right in the thick of the GT4 battle despite just two 20-minute sessions to set the grid for the first two races, practice a long forgotten luxury on the schedule with the opening round of the FIA Formula One World Championship. Q1 saw the pristine black and orange Interlloy machine second behind a much more powerful V8 Aston Martin, but rising ambient temperatures saw the X-Bow qualify three seconds slower in Q2, this time behind a BMW M4.

Menacing off the start of Thursday afternoon’s opening race, McMillan sadly dropped back through the field despite a shortened session due to a late race incident further forward in the pack, the high ambient temperatures in the mid-afternoon heat having a big affect on the performance of the turbo-charged 2-litre Audi powerplant.

A late start to Friday’s second race - which had been delayed by eight hours thanks to an on track incident immediately ahead of the scheduled 10:40am start - saw the field racing in the fading light with sunset occurring just a couple of laps into the second 25-minute race. Despite that McMillan charged on, although again down on power in the humid conditions.

Saturday morning though dawned wet and cool, conditions that suited McMillan perfectly. From rear of field, the local driver charged off the line, passing much more powerful cars with relative ease to work his way forward more than ten positions to cross the line 19th, and four positions clear of the second placed GT4 entry.

“That was more fun than I’ve had in a long time, I only wished there had been a few more laps, and I would have made it inside the top 15 because I was faster than a handful of the cars in front of me,” McMillan laughed. “Engine temperature wasn’t an issue, and the car would just go where you put it, it was almost on rails, a real pleasure to drive. I think once we can sort the issues it suffers in the heat, it will be a very competitive package.”

Unfortunately the higher temperatures returned for the final race of the weekend, where at one point it looked like McMillan may have been able to again enjoy himself with the heavier weather threatening to return, however despite the strong winds the rain stayed away forcing McMillan again to settle for fourth, although on aggregate he was classified third for the weekend.

For the M-Motorsport team, there are a few changes in the wings ahead of the second event at the all-new Bend Motorsport Park in Tailem Bend in South Australia in three weeks, with amongst other things, a new entry or two to join the team for the first endurance round of the season. 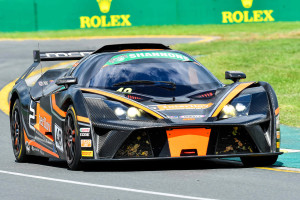 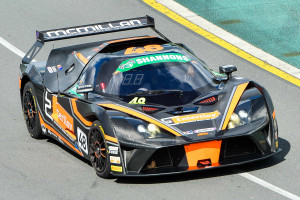